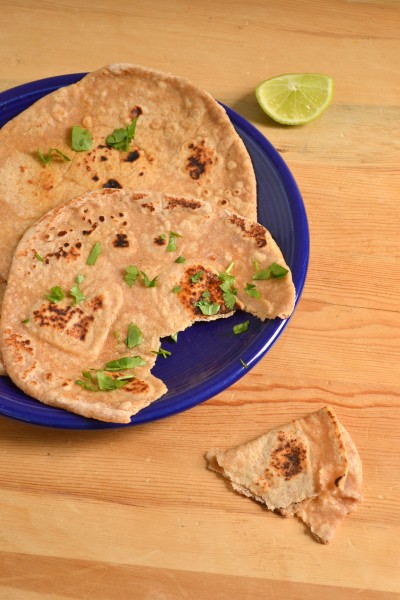 I was quite excited to see how many people were interested in this naan bread!  I was going to hold off posting, but I thought I better share 😀  This naan may not exactly be authentic, as naan is a yeasted bread.  Maybe this is more like roti or chapati, I’m not entirely sure, but either way, it’s an incredibly fast bread to make that would be awesome dipped in hummus, served along some kind of curry or even used just like a tortilla. 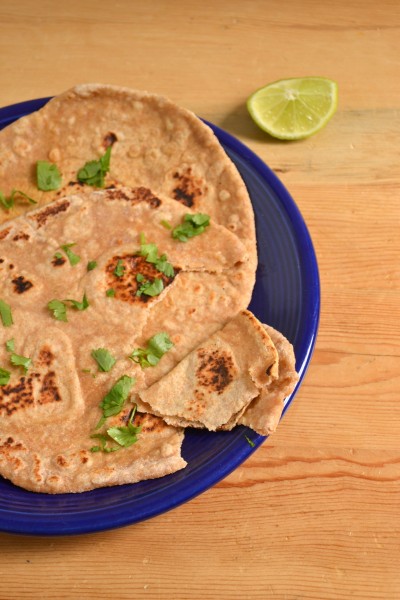 We like these on the thinner side, but you could make them slightly thicker and nicer for dipping by not rolling them out quite as much.  Just don’t make them too thick or they wont cook in the center as these are cooked very fast. 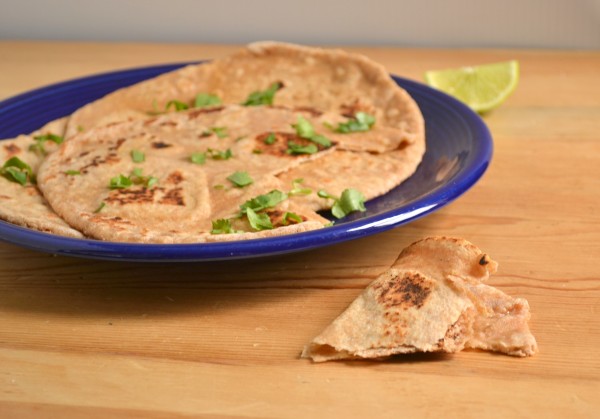 These have a very slight tangy flavor from the yogurt which I love.  You could use a non-dairy yogurt for a vegan/dairy-free alternative or you could use water like the original recipe but you may need a little more whole wheat flour to absorb all the water.  That being said the dough is still tacky when it’s finished being kneaded.  It’s shouldn’t be too sticky that pieces rip off and stick to your fingers, but it should still be a soft dough.  Resist the urge to add too much flour.  Just sprinkle with flour frequently when rolling it to prevent it from sticking.  Be sure to dust any extra flour off before throwing it in the pan though because the loose flour will burn and wont smell too pleasant. 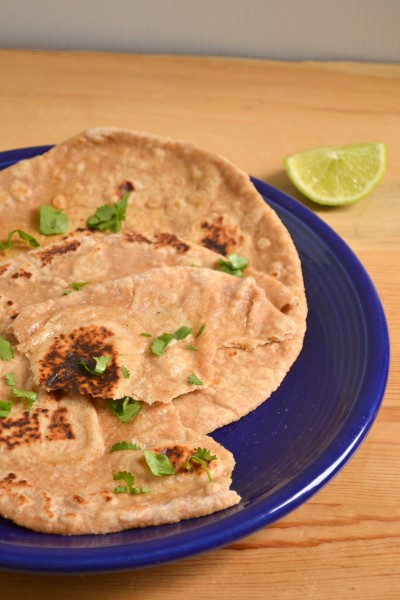 In a small bowl mix the flour with baking powder and salt.  Add the yogurt and stir until combined.  Using your hands add a small amount of flour to prevent sticking and knead quickly for 1-2 minutes until completely smooth(don’t be afraid of overworking!).  Only add as much flour to keep it from sticking to the surface or your hands.  Dough should be tacky.  Cut the dough into 4, roll into balls and let rest for a minute.

On the stove, heat a heavy skillet over medium high heat.  I use a cast iron skillet as it’s naturally non-stick and retains it’s heat very well but any pan should work.  Do not put anything in the pan – no oil, etc.  While the pan is heating, flour your surface and your dough and roll out to about 1/4″ thick and about 8-9″ in diameter.

Once the pan is hot, turn down the heat to just above medium and place the rolled out dough in the pan as flatly as possible(don’t worry if it falls into the pan wrinkled a little folded, the bread will move easily once it’s cooked for a few seconds and you can straighten it out).  It should start to bubble almost immediately.  Cook about half a minute before checking the bottom(it should have golden or dark spots before flipping) and cook longer if needed.  Flip over and press down on the naan with a flipper and cook just until the other side has golden or dark spots.  Remove from the pan and place on a towel.  Brush lightly with butter and cover with another towel to keep the bread soft while cooking the rest.

Repeat until finished cooking and serve immediately.  Watch the heat of the pan, it may take some experimentation to get the temperature just right.  Small, almost/barely burnt spots are good and add to the flavor, but a pan that’s too hot will ruin the naan very quickly.  Leftovers can be stored in a sealed bag on the counter overnight. 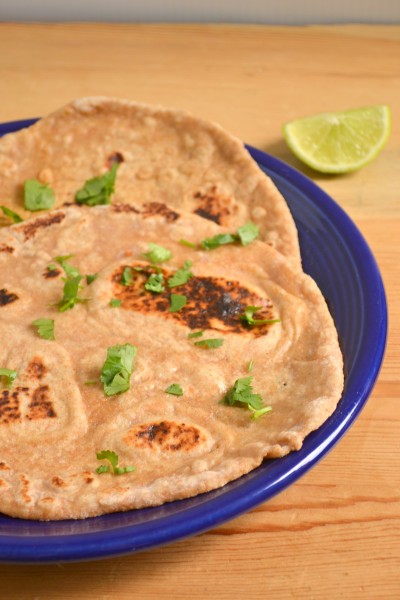