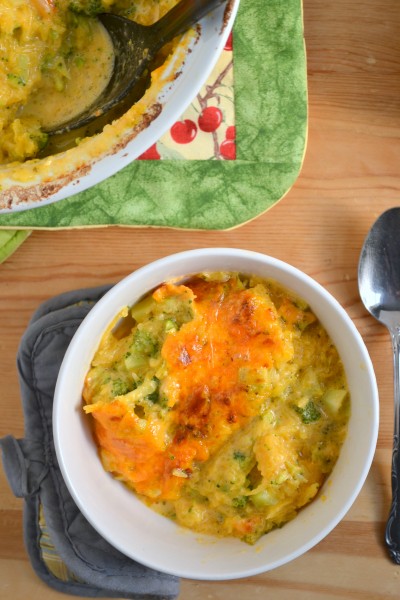 Before I go any further, I have to say… This is not mac and cheese!

Is it flavorful?  Yes.

Will it satisfy your cravings for pasta?  Not a chance.

I’m that person that was never fooled by spaghetti squash.  Yeah, it has little strands like spaghetti, but pasta it is not.  And if you look at it like the diet version of pasta, you’ll never like it.  Trust me.  I like it for what it is now that I acknowledge that it’s a veggie and not replacing pasta.  I love squash, and even though spaghetti squash is the weird one of the bunch, I still love it for what it is.  So, I repeat:  This is not a diet version of mac and cheese.  This is a cheesy veggie casserole that just happens to use spaghetti squash. 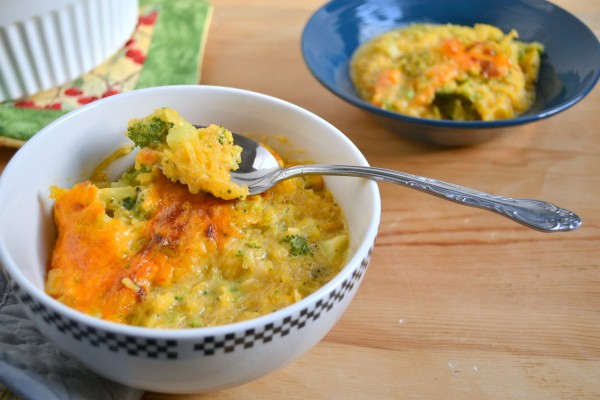 Now that I’ve got that out of the way, I have to brag a little…  This spaghetti squash actually came from my garden last year!  Yes, it took me a long time to eat it.

And I’m a little embarrassed to admit there’s another one hiding in my cupboard that I’ve been ignoring for months now.  Although you really can’t blame me – my spaghetti squash plant was the only squash that did well and it did a little too well.

But it still excites me that I grew the squash that’s in this.  And maybe now that I put it out there, I’ll finally use up my last lonely spaghetti squash 🙂  Suggestions?  What’s your favorite way to have spaghetti squash?

And if you’re looking for something meaty to go along with it, try this keto chicken piccata! 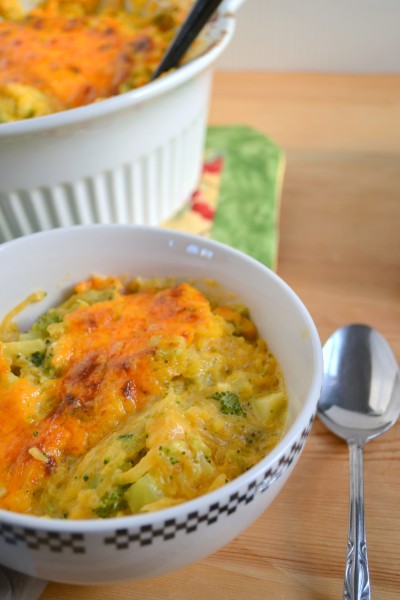 Start by cutting the broccoli into medium sized pieces, and peeling the stalk and cutting it up as well.  Place in a pot with a little water or in a steamer and steam for 3-4 minutes, until still firm, but softened and vibrant green.  Run the broccoli under cold water to stop it from cooking any longer.  Drain well, then pour out onto a cutting board and chop until no large pieces remain.  Set aside.

Preheat the oven to 350 degrees if planning to bake it.

In a small pot, melt the butter over medium heat.  Add the onion and turn the heat down slightly.  Saute for 4-5 minutes until softened before adding the flour and whisking together.  Allow the butter, onion and flour mixture to cook for a couple minutes while whisking to prevent it from burning.  It should be bubbling and sizzling.  Once it’s cooked for a minute or two, whisk the mustard powder into the mixture, and then add the milk and whisk very well to combine the flour and the milk, starting with 1 1/4 cups and adding a 1/4C later after the cheese is added if it is too thick(keep in mind the vegetables will thin the sauce out considerably so you want it thick).  Cook until the mixture thickens and comes to a boil.  Add 2 cups of cheese and mix well.  Cook just until the cheese has melted into the sauce then remove from the heat.  Taste and add a little more cheese as needed, keeping in mind the veggies will water the sauce down a little.

In a large bowl, combine the already chopped broccoli, spaghetti squash that has previously been cooked and drained to remove as much liquid as possible and the cheese sauce.  Mix well.  At this point you can heat on the stove and serve, or pour into a casserole dish to bake it – I used a 9″ souffle dish with a lid, but any casserole dish large enough will work.  Top with the remaining 1/2-1C grated cheese and bake for 30-40 minutes.  Once bubbly around the edges, heated through in the middle and the cheese on top is melted, turn on the broiler and broil just until the cheese on top is golden(if it isn’t already).  Remove from the oven and cool 5-10 minutes before serving. 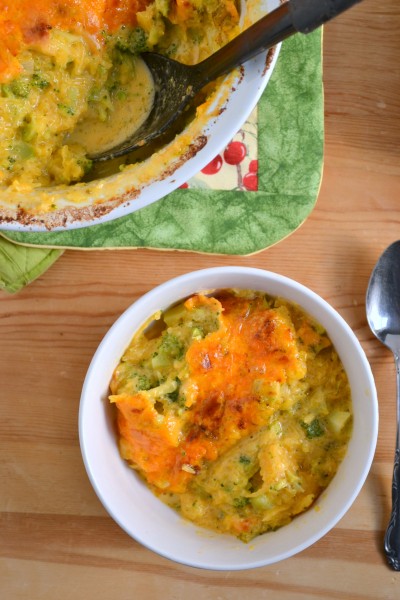