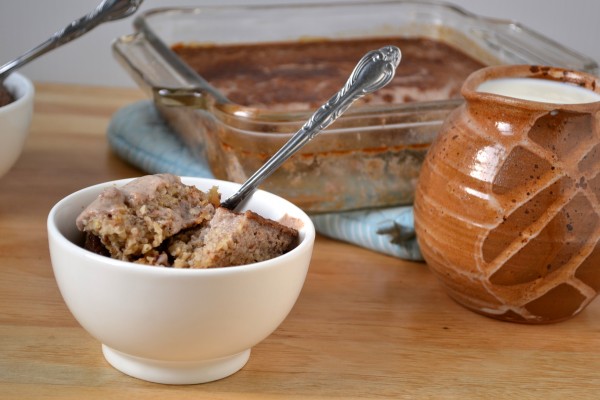 Let me just start out by saying, I think this would be better made on the stove or made with regular rolled oats.   That being said, I really enjoyed baking steel cut oats, despite that it took more time and that the oats all went to the bottom(which actually turned out to be delicious even if it wasn’t what I intended).  I haven’t tried it, but I’m sure this could be made in a crockpot using the same method as my Crockpot Pumpkin Pie Steel Cut Oats and this would be really yummy to wake up to 🙂  I’ve included a few different cooking variations in the printable recipe, just so you know that baking isn’t the only option. 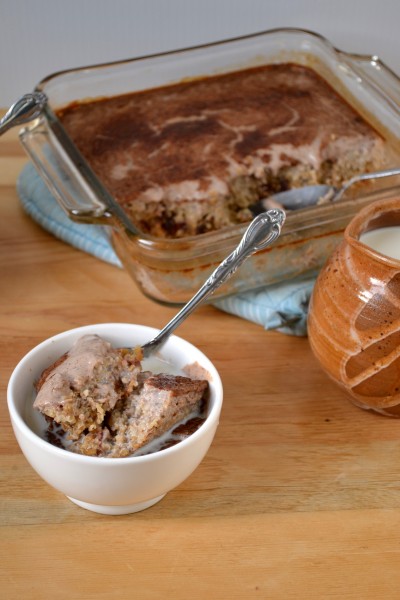 I used my homemade non-dairy eggnog along with almond milk and it turned out great.  Store bought eggnog is much sweeter so I would consider omitting the added honey.  Considering how much more rich store bought eggnog is you may also want to consider using a low fat variety or using low fat milk, or even water for at least some of the extra liquid unless your looking for a very rich breakfast 😀  If baking this using steel cut oats, be aware that the oats do sink to the bottom, leaving a creamy custard-like layer to the top.  I was disappointed with how it turned out at first, but then realized it was a delicious “addition” to the oatmeal.  The top will never be completely firm, but will be set enough when fully cooked that you’re not worried about it “splashing” out of the pan if you give the pan a light shake.  I used two eggs, but along with the eggnog, it was fairly eggy.  Be aware that if you use 1 egg the top may not set as well.  Either way, be sure to beat the egg(s) well before combining with the rest of the ingredients. 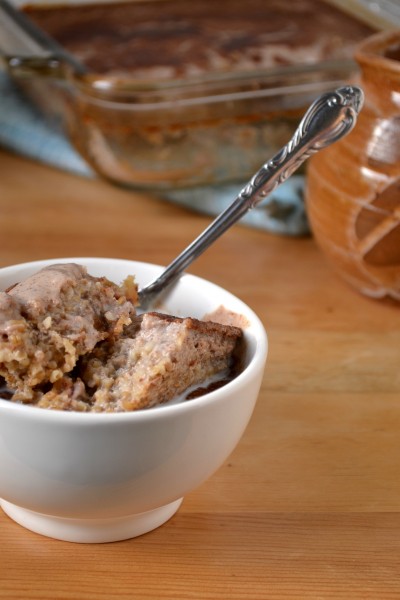 Preheat the oven to 375 degrees.  Prepare an 8×8 baking dish by lightly spraying the inside with oil.

In a medium sized bowl mix together the honey, eggnog, milk, vanilla, eggs and all the spices including the pinch of salt.  Mix in whichever kind of oats you prefer, being aware that steel cut will take slightly longer than rolled oats.  Pour the mixture into the prepared pan and place in the oven.  Bake for 35-40 minutes for steel cut oats(or just about ten minutes less for rolled oats, but keep an eye on them for doneness sooner) until the edges are golden and firm and the center is set, it should be soft, but not too wiggly in the middle.  If desired, sprinkle the top of the oats with a cinnamon sugar mixture and place back in the oven for 5 minutes.  Remove from the oven and let cool for 10 minutes before serving.

Stovetop Variation:  To cook this oatmeal on the stovetop omit the egg(s) and place all ingredients in a medium sized pot on the stove.  Bring to a boil, then turn down to simmer and cook for about 20-30 minutes for 1 cup of steel cut oats(depending on how tender you like the oats to be) or about 10 minutes for 2 cups of rolled oats.  Stir fairly frequently to prevent scorching the bottom.  Steel cut oats should sit a few minutes off of the heat when finished cooking to absorb some of the extra liquid.

Crockpot Variation:  Mix all ingredients the same way in the original recipe.  Spray the inside of your crockpot lightly with oil and pour all of the raw oatmeal mixture into the crockpot.  Cook on low for 5-6 hours.  I find that steel cut oats work well in the crockpot as long as they are not overcooked.  I have not tried rolled oats in a slow cooker and can’t recommend using rolled oats for this recipe in the crockpot. 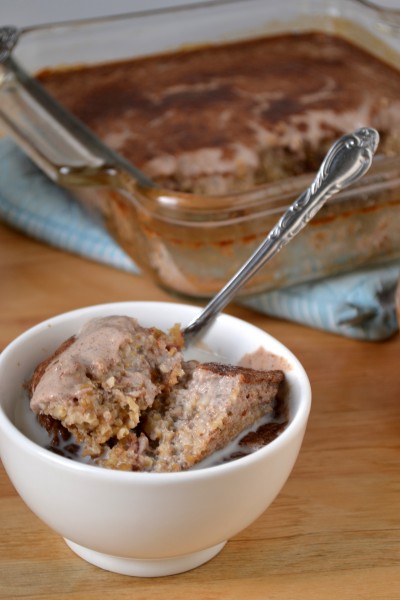 Just as a small side note, I’ve been busy around Food Doodles lately.  If you haven’t been by for a visit lately, come take a look!  I’ve been slowly working on the new layout – which actually started an entire month ago, but I neglected to mention anything because I still have so many things I’m working on.  I’ve also improved the Recipe index page to hopefully make your exploring easier.  I’ve added links to the most popular recipes on the blog to the side bar just to the right of the main content as well.  Like I said, I have so many plans to improve my readers experience here at Food Doodles!  If you have any suggestions for helpful features you’d like to be able to use on Food Doodles please leave me a comment or send me an email to fooddoodles at gmail dot com.  I really appreciate any suggestions!