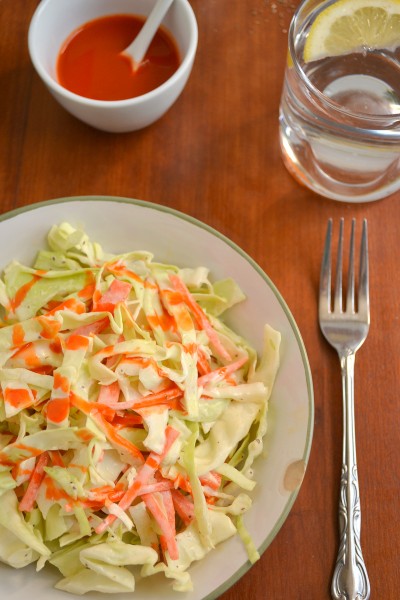 I’m finally getting some veggies from my garden!  I had to share that – it’s seemed like I would never get anything but even now I’m almost overrun with cherry tomatoes.  Yay!  And I even used a pepper out of my garden the other day, even though it probably could have used some more time it still tasted yummy.  I’ve even picked a cabbage 🙂

Unfortunately I still wont have carrots of a decent size for a while, but we’ve been eating peas for what seems like a really long time now, which really isn’t a bad thing.  Even the kids go down to the garden and grab some peas in the pod to munch on.  I hardly ever do anything with them, they’re just too good to eat raw. 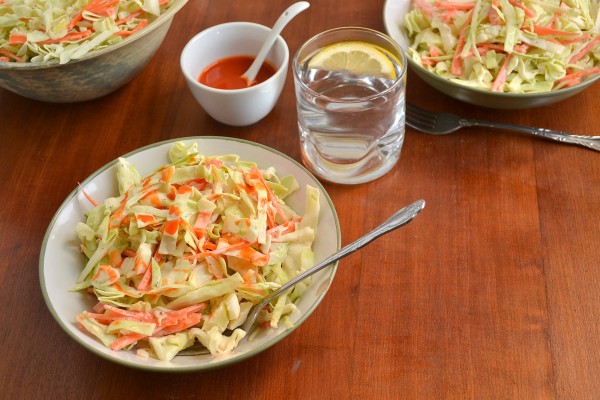 I have a ton of little yellow winter squashes(of unknown variety, simply because I forgot) just starting out and not much bigger than baseballs.  I even have a couple really large squashes that look like spaghetti squash, but I’m not entirely sure of what they are either.  That will teach me for not even remembering or keeping the tag of the squash plant that looked interesting enough for me to buy at the nursery.  I’m not too picky about squash, I like them all so I’m not worried 🙂

We have a fairly minimal garden this year, I wasn’t feeling like experimenting or putting a lot of effort in this year so I just went with what we use most of.  I planted plenty of tomatoes to can(we just finished last years canned tomatoes last week!) and hopefully make a little salsa with my peppers too since I haven’t made salsa to can before and we enjoy it occasionally.  I also planted a ton of cucumbers hoping to make pickles but I didn’t get as many plants as I planned for so we’ll see how many pickles I can make 🙂

I was planning on taking pictures of my garden, and then I kind of wasn’t.  I know at some point I will post pictures of my tomatoes plants at least because I’m especially proud of them this year.

I’m curious to hear from you, does anyone else have a garden?  How is it this year?  Did you grow anything new and exciting?  Does anyone else can and preserve anything? 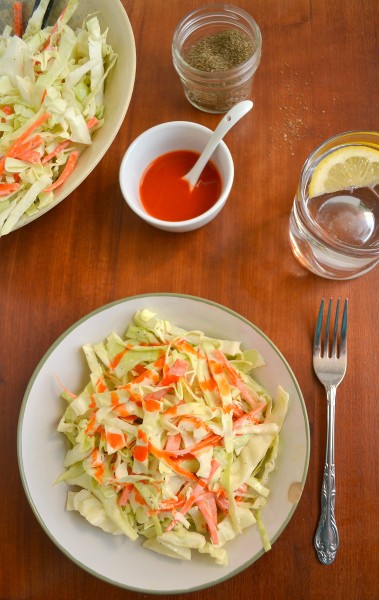 I thought I’d post another summer salad I enjoy.  Except it’s not really just for summer, cabbages last a long time so this will be a great salad into the fall too.  This is my favorite coleslaw dressing that I’ve adapted considerably from an old Better Homes and Gardens recipe.  The original recipe uses mayonnaise and white sugar which I don’t like to use often, plus sweet relish which we don’t even keep at home so I used my own substitutions.  My son even had a bowl of this three days in a row so I think that’s a success.  Feel free to adjust the vinegar and honey to taste, you may like it sweeter, or more sour, or just more of both.

It may be a little strange, but I’ve been enjoying my coleslaw with a drizzle of hot sauce over top or even mixed in.  The dressing is creamy and light and the hot sauce doesn’t take over if you use just enough to give it a kick.  Try it in small bowl first to see if you like it 🙂 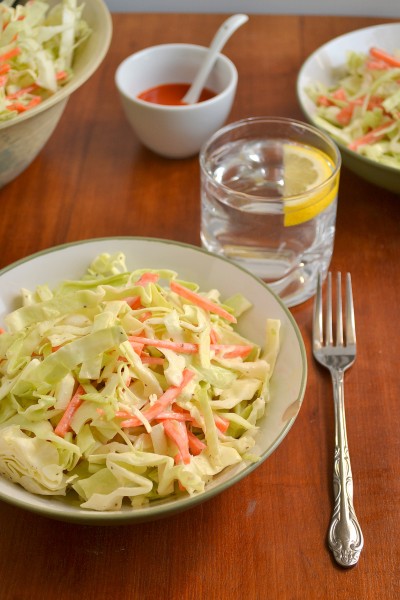 Prepare all your vegetables, peeling the outer layers off the cabbage if needed, and peeling and carrot and onion.  Thinly slice or grate your cabbage and other vegetables.  I like to julienne my carrots just because I like bigger pieces but you can grate those as well if you want.  Keep the cut up mix in the fridge for up to a week covered(this will depend on the other vegetables used as cabbage and carrot last quite a while if covered properly in the fridge).

If you need to strain yogurt to use in the dressing line a colander with cheesecloth folded over so that no yogurt escapes.  Pour in the yogurt and then cover with the edges of the cheesecloth.  How long you should strain will depend on the thickness of the original yogurt you’re using.  Also, I would recommend straining at least a cup, if not more yogurt so that you have enough when some of the liquid is strained out.  Test the yogurt frequently, just with a spoon to see how thick it’s gotten.  Keep in mind that it should be quite a bit thicker than a traditional creamy salad dressing as you’ll be adding plenty of liquid to it when you mix the dressing.  Once thick enough, remove yogurt from the cheese cloth into a separate container.

Measure out 1/2 cup into a small bowl.  To the yogurt add the liquid honey, apple cider vinegar, chopped pickle if using, salt and celery seed.  Mix well with a spoon, then cover and refrigerate at least an hour, but it will be best after sitting over night.  When ready to serve mix as much dressing as needed with as much salad as desired and serve.

Unlike traditional coleslaw I find this dressing gets watery when mixed and left to sit with the salad so I recommend mixing just before consuming, or at the most only refrigerate a few hours before serving.  I like to eat my coleslaw with a drizzle of hot sauce.[/print_this] 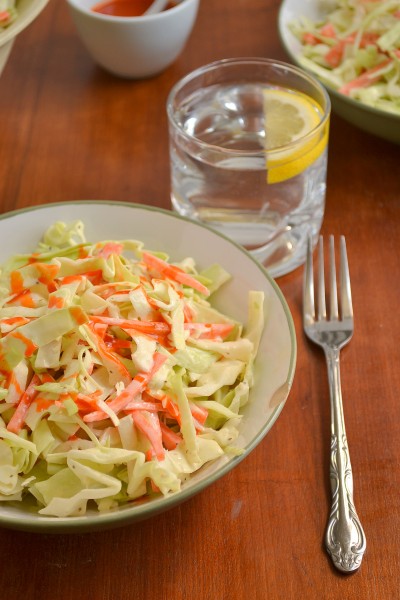