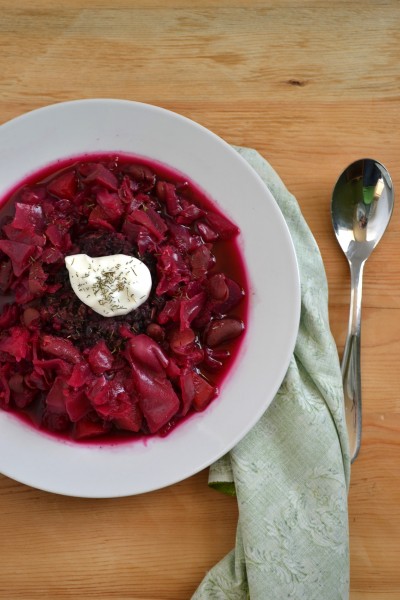 Is anyone else having a hard time getting motivated?  I’ve actually been abnormally motivated around the house, organizing, cleaning and simplifying things, but not so much in experimenting in the kitchen.  I’d like to blame my lack of motivation in the kitchen and on the blog on the more relaxed time of year, the lack of decent lighting for taking food pictures, or the internet problems that have been coming and going for the last week, but I know that too much sugar and not enough good stuff has left me feeling blah(not to mention sick), so I’m slowly working back to my normal self.  That being said, I actually made this soup a while ago and now I’m pulling leftovers out of the freezer.  I love sticking to the recipes I know, and being able to dig meals out of my freezer, but I am getting more and more motivated to get back in the kitchen with some new healthy recipes. 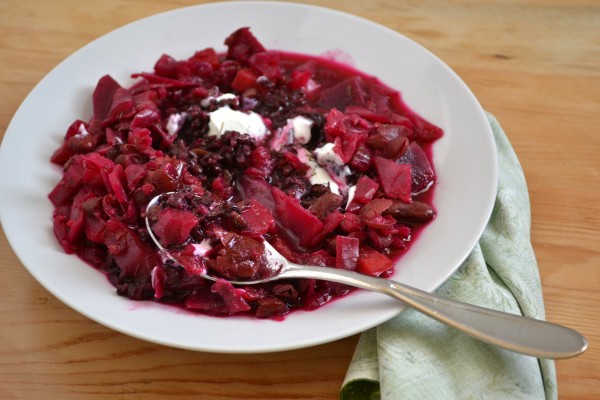 As much as I enjoy this soup, I’m a little nervous about sharing this recipe – at least under this name.  It’s actually inspired by this recipe passed onto me by my sister in law.  I liked the general idea so I made my own version and at the end I realized, despite the lack of meat and the addition of beans this is unusually like the borscht I’m used to.  That being said, borscht is on my side of the family and my husbands side and strangely enough despite the many variations in borscht recipes the two must be very similar because they taste almost the exact same.  So I’m a little nervous to call this borscht with it’s obvious differences, but that’s really what it reminds me of and if you give it a try you’ll see different can be delicious too 🙂 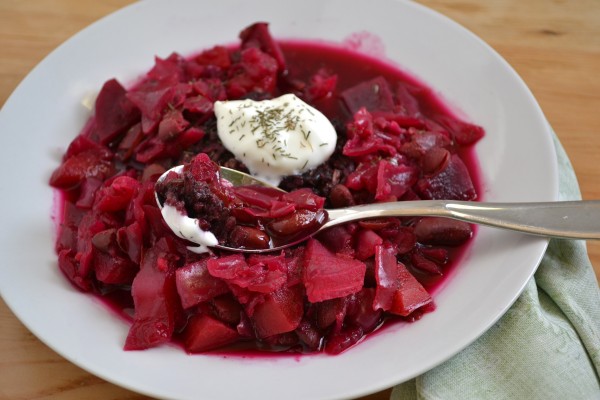 In a large pot or dutch oven heat the tablespoon of oil over medium heat.  Once hot turn the heat down slightly, add the onions and saute for 5-6 minutes until softened.  Add the carrots, stir and cook for another few minutes before adding the cabbage and beets and the stock or water.  Bring to a boil, then turn down and simmer until the vegetables are all tender.  Mine was done in about 10-15 minutes, but this will all depend on how large you chop your veggies and how soft you want them to be.  This would be great as a stew with larger pieces of carrot and beets, but I kind of prefer mine with smaller pieces to get a bite of everything in one spoonful.

Once the vegetables are tender, stir in the apple cider vinegar, salt, black pepper and dried dill(*fresh dill would be so much better – be sure to use quite a bit more if using fresh).  Cook for another minute or two before removing from the heat, tasting and adjusting as needed.  The beets and carrots should give enough sweetness on their own, but in case the vinegar is overpowering add 1 tbsp of sugar or honey.  The broth should be fairly sour though, as the vegetables are on the sweet side.  Add more salt as needed.  I used a salted stock for my soup(I also used home cooked beans without any salt) so if you use a reduced sodium stock or water you may need more.  When serving, place a scoop of rice in the bowl and top with soup, or you can mix the rice in with the soup before serving, but I prefer to store my soup and rice separate as the rice will absorb the liquid as it sits in the fridge.  Serve with a dollop of sour cream or greek yogurt and a sprinkling of fresh dill if possible.

This soup freezes well and should be fine in the freezer for 4-6 months. 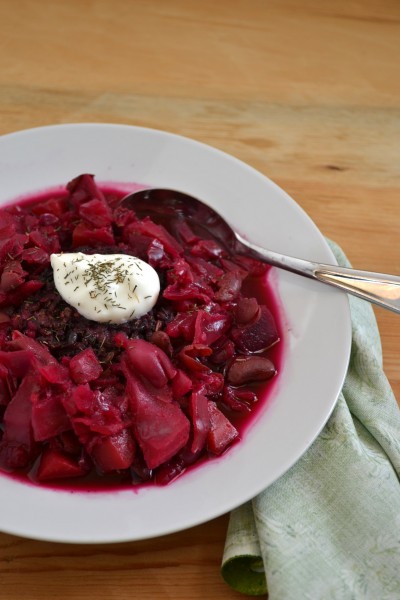