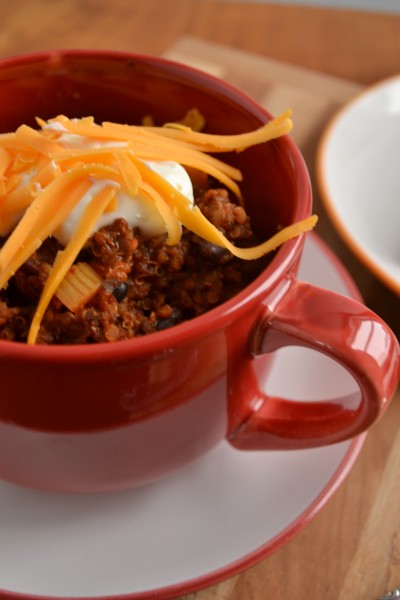 I realize that most of what you see in this picture is cheese.  I may have been a little heavy handed with the cheese as I have been lately.   Oops.  Really, melty cheese on top of chili is so delicious, who can deny that?  I can honestly say it’s especially delicious now that I’m pregnant because I’ve never gone crazy for cheese until now.  But I have to be completely honest, I was so happy with this chili that I think I’d even eat it plain by itself. 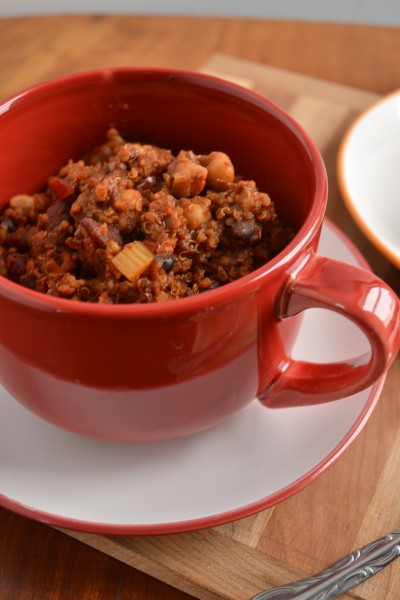 You can’t tell me that looks bad all on it’s own.  Although I gotta admit it’s hard to photograph chili.  But then again a lot of the time I think whatever I’m taking pictures of is hard to photograph so I usually just don’t say anything at all.  Speaking of this chili, all on it’s own…  It’s actually better the next day.  So if you hate leftovers – I’m so sorry you’re missing out on the best part.  Give it a try a a day or two after making it – it’s so much tastier.  This also freezes well and makes quite a bit so don’t be afraid to throw some in the freezer in small enough portions so that when you have nothing else planned you can pull out some of this 🙂 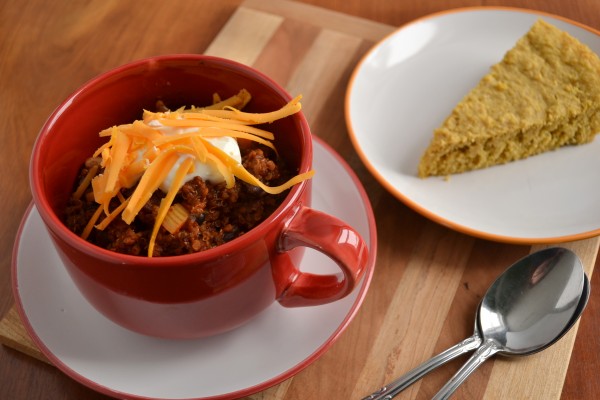 Before I go any further, I have to tell you, you need a mild chili powder for this recipe.  So don’t freak out at the amount that’s in this recipe.  This chili does have a little bit of heat because it does have so much, but to me, chili needs a ton of chili powder.  You could  reduce the amount of chili powder, and feel free to add some hotter chili powders in the quantities that you want, but to me, this is how chili should taste 🙂  And I’m pretty picky about my chili.  Speaking of adding things you can also add some ground beef if you want, my husband even added some leftover steak to his bowl, so if you want to, go for it!  Just as long as you serve it with a big piece of cornbread (like this Homemade Jalapeño Cornbread). 😀 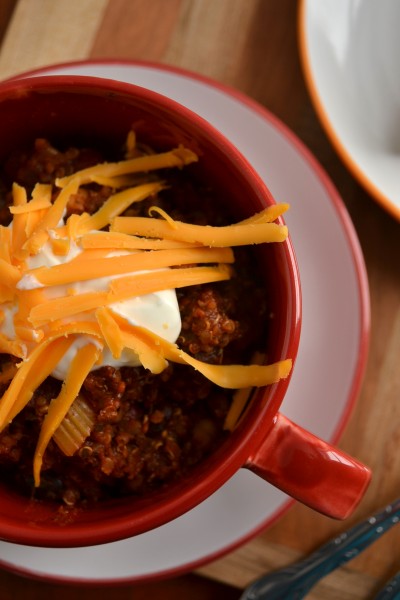 Add the tomatoes in their juice, tomato paste and all the herbs and seasonings including the cocoa powder and maple syrup.  If you don’t have maple syrup, honey or even sugar will do, you wont taste it as the purpose of it is just to neutralize the over-acidic taste of canned tomatoes.  If using canned beans start with 2 tsp salt even if you rinse them well and add more once the chili is done cooking as canned beans contain salt.   Stir well and bring the tomato mixture to a boil before turning the temperature down to a simmer.  Cook the mixture for 10 minutes or so.

Stir in the beans and quinoa after the tomatoes have had a chance to cook for a few minutes and turn the temperature up.  Bring to a boil again and then turn down to a simmer.  If it’s splashing out of the pot, you can continue to cook it while covered.  Simmer for 15 – 20 minutes, stirring fairly frequently as you don’t want it sticking to the bottom of the pot as it gets thicker.  You can add a small amount of water while cooking if you think it’s getting too thick, but only add about 1/2C as you’ll want your chili fairly thick.  Once the quinoa is done cooking(you can test a small amount to be sure that it’s done), place a lid on the pot and let the chili sit for 10 minutes before serving.  The quinoa will absorb more liquid making a super thick chili.  You can thin it slightly with water as desired or leave it as is.  Serve hot with fresh cornbread and all the toppings you enjoy like sour cream and grated cheese. 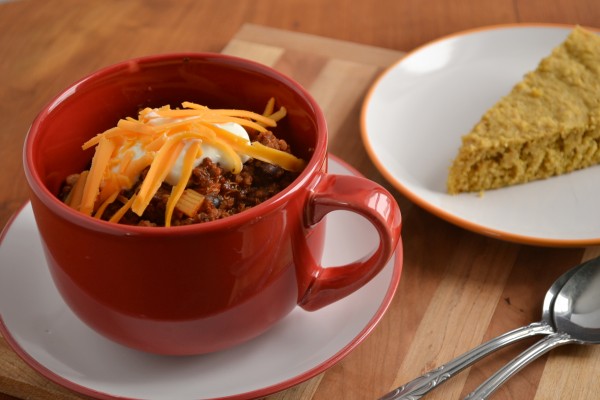