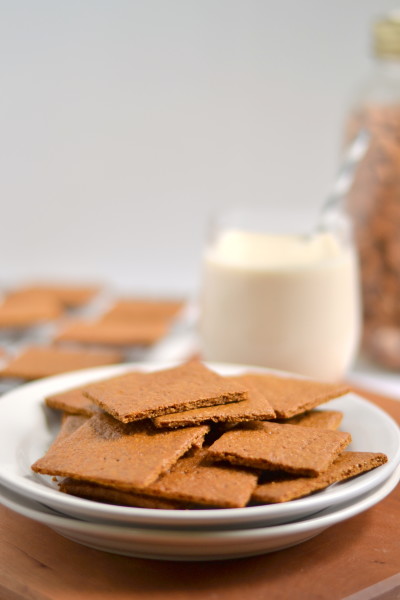 I have a confession.  I’m not one of those people that can wing it when it comes to baking.  I usually have a recipe (or two or three) that I adapt and adapt and adapt until it is what I want it to be.  I don’t often change a ton of different things at once(although I do have a mental list of “safe” changes to make to a recipe), usually just one or two so that I don’t create anything too inedible.  So I’m just a little proud to say I briefly glanced at a couple graham cracker recipes before I decided to wing this one.  Granted, graham crackers aren’t too complicated, I’m still proud of them 😀 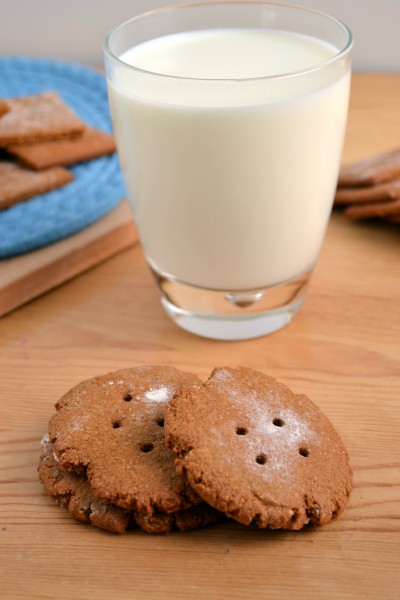 As you may have noticed, in the first picture I made Graham Buttons!  The truth is, I get bored of rolling dough out and cutting cookies really quickly.  With the remaining dough I pinched off little 1 1/2 – 2 tsp pieces, rolled them and then squished them with the bottom of a cup that had been floured.  And then I poked them with a chopstick.  Probably just as time consuming as rolling out more cookies, but for some reason it annoys me less.  Plus the kids like squishing dough more than rolling it 😀 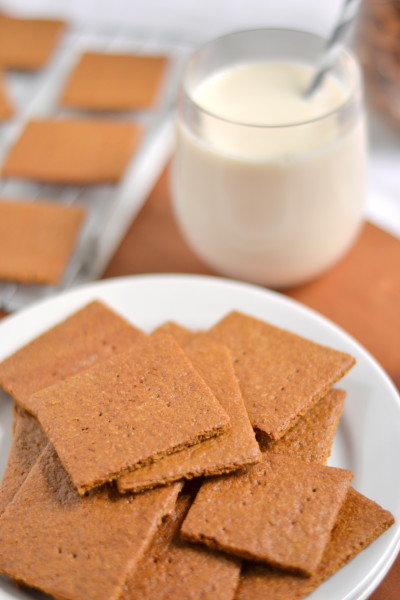 And of course, I love these with a little bit a peanut butter.  I put peanut butter between the buttons too, but they were a little too thick for that.  I suggest graham crackers and a glass of milk alongside the jar of peanut butter.  Can’t go wrong there 😀 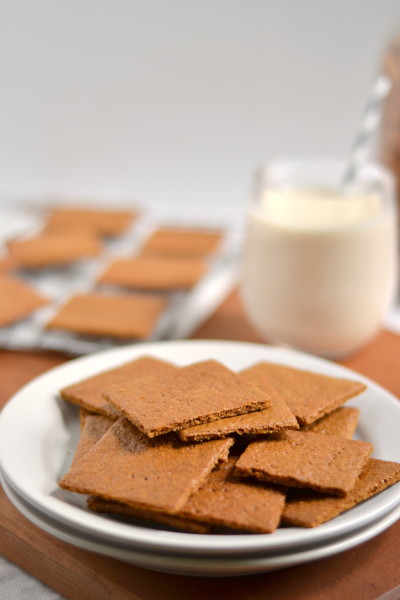 So now, onto more exciting things.  I’m very excited to have a giveaway for you!  The generous people at Wondermill are hosting a giveaway for one of their Electric Grain Mills that I reviewed in this post. 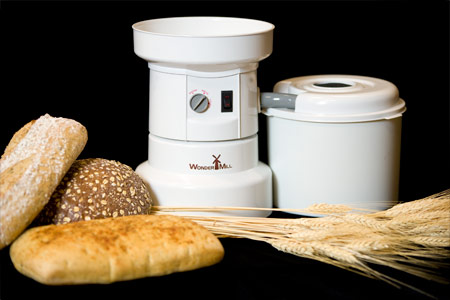 Since my review, I’m still very happy with my grain mill so I’m so SO excited to be able to share a mill with one of you!  Even if you’re gluten-free, don’t feel left out of this giveaway.  Be sure to check Will It Grind to see the variety of other things the mill can grind, including things like brown(and white) rice, lentils, beans and quite a few other gluten-free options.  Be sure to check the items that it wont grind though too, which mostly include nuts and seeds that are more suited to being ground in a food processor anyways.

There are three ways to enter this giveaway!  Make sure to leave a separate comment for each one.

Unfortunately, this giveaway is only open to those with a US mailing address!  Sorry to all my international readers!!  Giveaway will end on Wednesday March 21st at noon MST and I will email the winner(so make sure to fill out your email when you comment!) and announce the winner in a post that afternoon or the next day. 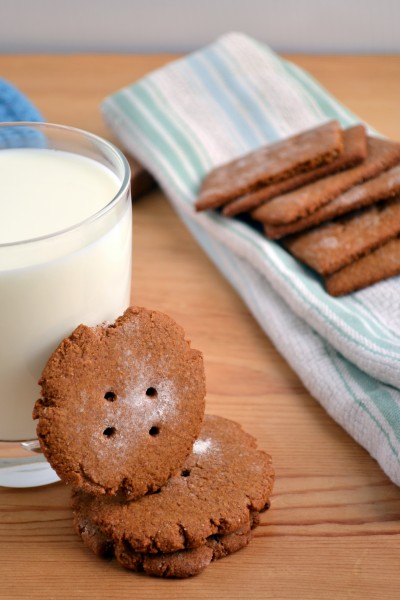 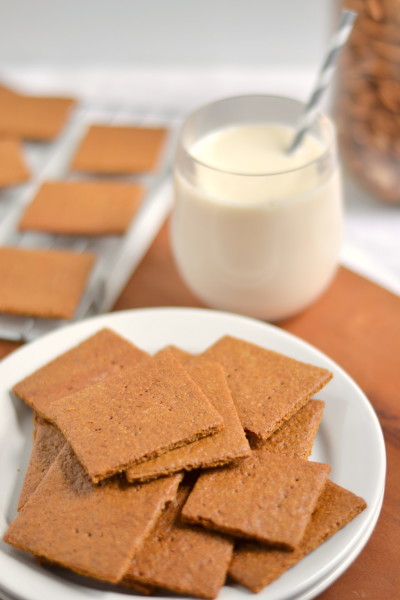 Preheat the oven to 350 degrees.  Line 2 baking sheets with parchment or a silicone baking sheet.

Mix together the flours, baking soda, baking powder, salt and cinnamon and set aside.  In a small bowl, mix together the oil(melt the coconut oil if using), honey, blackstrap molasses(or substitute regular baking molasses), vanilla and milk.  Mix well and add to the dry ingredients.  Mix until all the flour mixture has been incorporated adding 1 tbsp extra milk only if needed.  If rolling the dough out, divide into 2 small pieces, wrap in plastic wrap and refrigerate about 30 minutes(or place in the freezer for about 10 minutes).  It is possible to roll it out immediately but holds together better when chilled.

If making graham buttons, do not chill.  For the buttons, pinch off 11/2-2 tsp sized pieces, roll into balls and then flatten with the smooth underside of a cup that’s been dipped in flour to prevent sticking.  Press to 1/8″-1/4″ thick.  Poke 4 holes in the center of the cookie using a chopstick and bake for 12-13 minutes until the edges just turn golden.

If you’d like to roll out the cookies, chill dough for a few minutes and then roll out one piece at a time until 1/8″ thick on a well floured surface(or roll out on your parchment paper on silicone baking mat with plastic wrap over the dough to prevent it from sticking to the rolling pin instead of flouring).  Cut off the uneven edges and then cut the remaining dough into even squares or rectangles.  Carefully transfer dough to prepared baking sheet about 1/2″ apart and then poke with a fork.  (The cookies also bake just fine if you roll them out on the parchment you will be baking them on, cut them and then leave them together, but the edges aren’t as pretty.  Just run a knife over the cuts while the cookies are still hot from the oven then let cool completely before breaking)  Bake 11-12 minutes until just golden around the edges, turning pan half way through.  Cool on the pan for 5 minutes before transferring to a cooling rack and cooling completely.  Store in an airtight bag or container at room temperature.

If your cookies are slightly soft when completely cool return them to a 250-300 degree oven for 5-10 minutes to dry them out to be crispy.[/print_this] 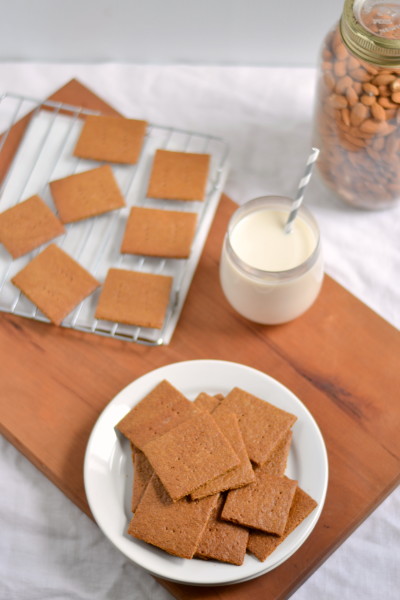