These Eyeball Cupcakes for Halloween have a delicious and moist chocolate base, cream cheese frosting and eyeballs that consist of canned lychees, blueberries and strawberry jam “blood.” Can be made gluten-free.

I always struggle to come up with Halloween desserts that aren’t processed or that use food coloring. So I took the bloody eyeballs idea from my Bloody Eyeball Brownies.

I plan to continue using that idea because it’s so perfect! Easy to make, creepy and unique.

I also featured these eyeballs in my Halloween Monster Mouths, which are really fun for kids to make! And they just consist of fruit, nuts / seeds and jam, so they’re a truly healthy Halloween treat.

I’m sure a lot of you must be thinking…

These cupcakes use canned lychees with a blueberry in the middle to create the eyeball.

Lychees are a fruit native to China, but in the US, they’re also grown in Florida and Hawaii. They’re quite sweet and fragrant with floral notes.

While you can use fresh lychees, they’re quite challenging to find. However, you can find canned lychees at any Asian food store. At least you can at every one I’ve ever looked at!

I’ve read that you can also often find them at Whole Foods. Sometimes in the Asian food section and sometimes in the canned fruit section. But perhaps it’s safer to call first before making a special trip. 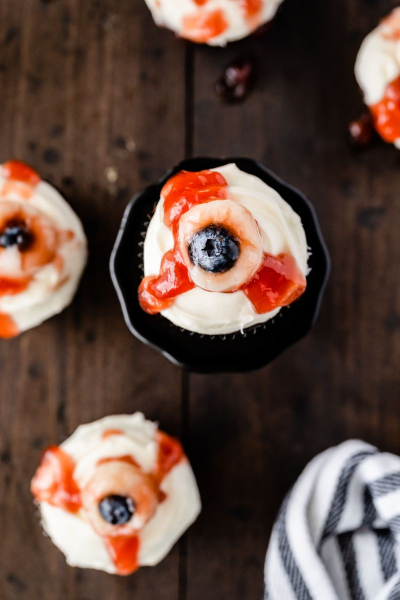 Inside of the lychee eyeball is a blueberry. If you don’t want to use those, chocolate chips are a possibility.

Small to medium grapes would also work! That could be fun to have different colored eyes. 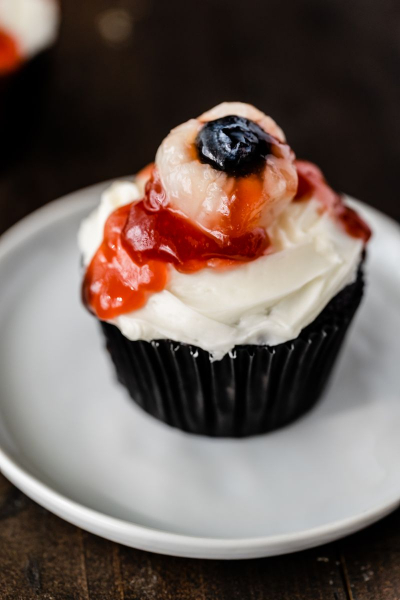 I have a Halloween punch recipe coming soon with these lychee eyeballs, so you might want to get 2 cans of lychees if you like the idea. 🙂

What kind of cupcakes do I use?

For the chocolate cupcake base, you’ve got a lot of options.

It’s a half recipe of my Healthy Chocolate Cake, which reviewers are loving! And which I’ve loved for about 12 years. I’ve never found a better chocolate cake recipe.

The cupcakes are perfect on their own. But as we all know, cream cheese frosting always makes things better and the eyes need a base to sit on. 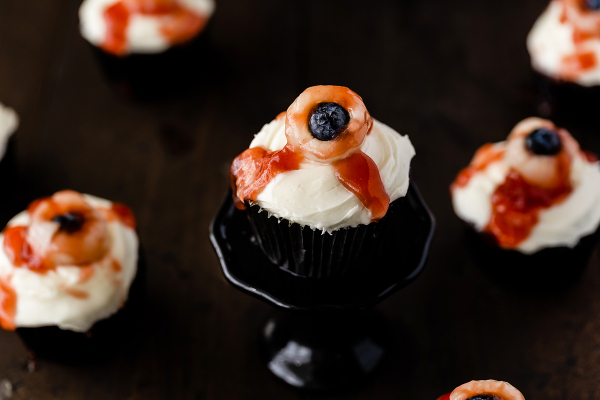 But you won’t miss it! The frosting tastes kind of like cream cheese tart filling.

If you’re doubtful of this whole less sugar thing, just add more sugar until you’re happy with the taste!

By the way, if you live outside of North America, you don’t have the same kind of cream cheese that’s found in the US (and maybe Canada?). As far as I know, it doesn’t exist anywhere else.

See the notes section of the recipe for tips on how to deal with this! There’s a super simple hack.

Where do I get canned lychees?
You can get them super cheap at an Asian food store.

You can also find them at Whole Foods. Sometimes in the Asian food section and sometimes in the canned fruit section. But I recommend calling before making a special trip.

Can I use something else instead of lychees?
I’ve never come across anything similar.

What can I use instead of the blueberries?
Inside of the eyeball is a blueberry. If you don’t want to use those, I recommend grapes. 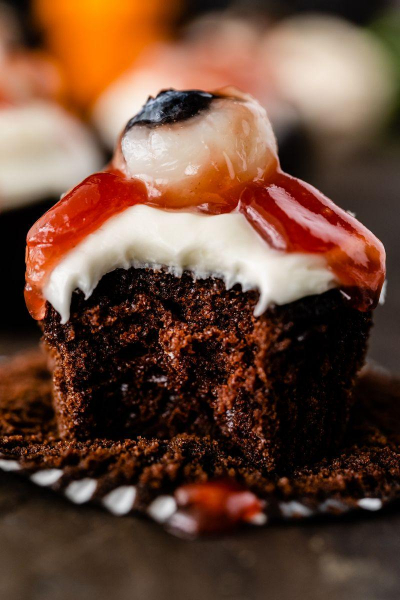 What’s the best oil to use?
You can use canola oil, vegetable oil, grapeseed oil, etc. Anything neutral tasting. There might be some slight coconut taste in your cupcakes if you use unrefined. If you use refined, you won’t taste any coconut. You can also use olive oil (see the next question).

Can you taste the olive oil?
I used extra-virgin olive oil, which you can taste in the batter and while the baked cupcakes are still hot. Once it cools, you can’t taste it. If you’re worried about it, use light olive oil (the light refers to the taste and not calories).

Can I use butter?
I bet you could use butter in these cupcakes but the cupcakes wouldn’t be as moist (butter is 80-82% fat and oil is 100% fat).

Can I use a different gluten-free flour mix?
I used Bob’s Red Mill Gluten-Free 1-to-1 Baking Flour. If you have another brand that works as a sub for all-purpose flour, then you could probably use it here. I can’t say the texture would be as perfect as with the flour mix I used, though.

Can I use almond / coconut / other flours for a different gluten-free version?
Nope. There’s no direct sub for gluten-free flour mixes. 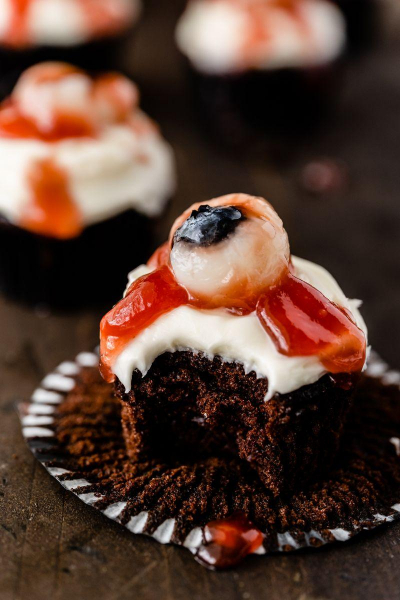 Can I reduce the sugar?
Reducing sugar also reduces moist-ness so unless you want a dry cake, don’t go overboard and reduce it to 1/4 cup or some small amount. I think using 3/4 cup of sugar would be safe. The honey version is already a reduced amount (1/2 cup of honey instead of 1 cup of sugar) and I don’t recommend reducing it even more!

Can I freeze the cupcakes?
Yes, they freeze well – unfrosted. Add the frosting after they’ve completely defrosted. Then add the eyeballs right before serving.

It can be done a few hours ahead of time if going to a party.

Can I use a different egg replacer?
I haven’t tried, but I imagine other egg replacers (that you’ve used in other cakes with good results) would work. 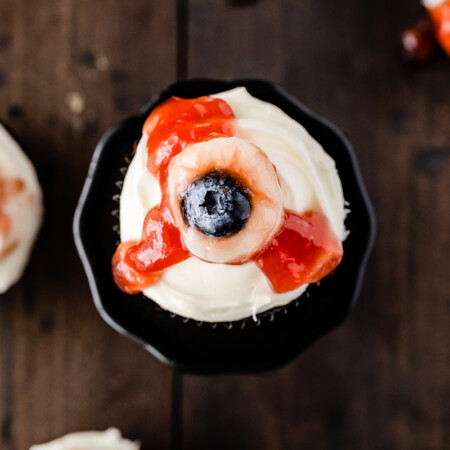 To make the cupcakes:

To make the frosting:

To make the eyeballs:

* Use whatever kind of milk you want, just not canned coconut milk as it's too thick. If that's all you have use half coconut milk and half water. ** Use whatever type of oil you want, but if you use olive oil, the batter will taste like it but once cool, you can't taste it. If you want to use coconut oil, I recommend refined coconut oil for no coconut taste. *** I know that sounds like a lot of water but I promise you, you need 1/2 cup! **** If you live outside of North America and have the kind of cream cheese that's meant for toast (that comes in a little plastic tub) rather than American style brick cream cheese, then get 225 grams of cream cheese, place it in the center of a cheesecloth, and wring out the liquid until you have 170 grams of cream cheese left. Adapted from Hershey’s One Bowl Chocolate Cake
Tried this recipe?Tag me today! Mention @easywholesome or tag #easywholesome!