Learn how to make pumpkin puree, straight from a pumpkin instead of a can! Read more to find out the trick to avoiding watery puree.

So the problem with homemade pumpkin puree is that sometimes it can be far more watery than the canned variety.  I usually call for canned pumpkin puree in my pumpkin recipes, especially baked ones, because I know some people are going to have really watery homemade puree.

That extra water can really cause a recipe to flop! I’m obsessed with precision in baking so extra liquid makes me nervous.

But I know that some people don’t want to use canned pumpkin puree. And I know all about the issues with BPA and how the chemicals used in BPA-free cans might even be worse for you than BPA itself.

I don’t like that, either. So I can understand why you may prefer to make the puree yourself.

So here we have a recipe for homemade pumpkin puree! If you’ve been putting off trying to make your own and if you already make your own but it’s too watery, this recipe is for you. 🙂

To make this homemade puree, we first start with some fresh pumpkins. I bought mine from our local fruit stand. I got six in total for under $10.

What pumpkins should I use for homemade pumpkin puree?

If you live outside of North America, those may be difficult to find. You can also use Hokkaido pumpkin, also known as red Kuri squash, which seems to be the most commonly available pumpkin in many countries.

Start by washing your pumpkins.

Then remove the stem (I kind of forgot that step for these photos 🤦‍♀️) and slice the pumpkins in half with a large sharp knife. Scoop out the seeds with a spoon. You can save them for roasting if you want! 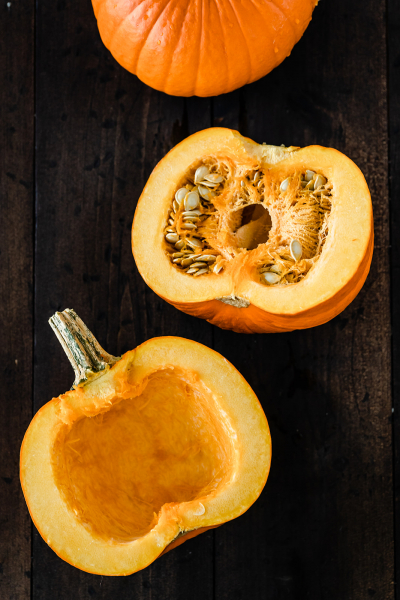 Place the pumpkin halves, cut side down, on a baking sheet. Pour enough water to come up about halfway on the edge of the pan and place the pan in the oven. 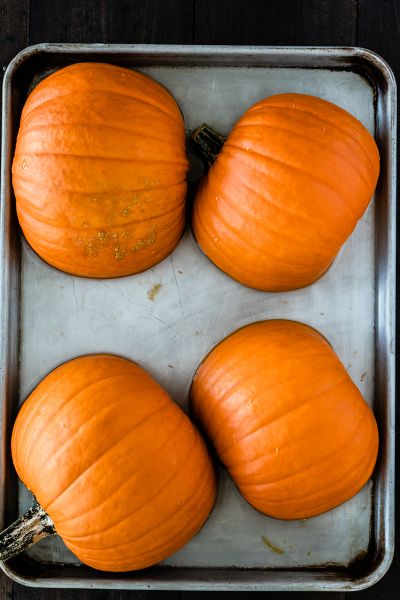 Bake at 350 °F (175 °C) for about an hour or until the flesh is very soft. The exact time will depend on the size of your pumpkins.

Can you eat pumpkin skin?

Yes! It’s safe and has lots of nutrients. If using a sugar pumpkin or Hokkaido, you can skip the next step where you separate the flesh from the skin. Butternut squash skin is too tough and should be separated from the flesh.

If you want to use another type, you’ll need to google whether or not that skin gets soft enough.

Before pureeing, I would still remove any areas with blemishes, like the top left pumpkin above has.

The puree will be less sweet, but on the other hand, a bit richer. 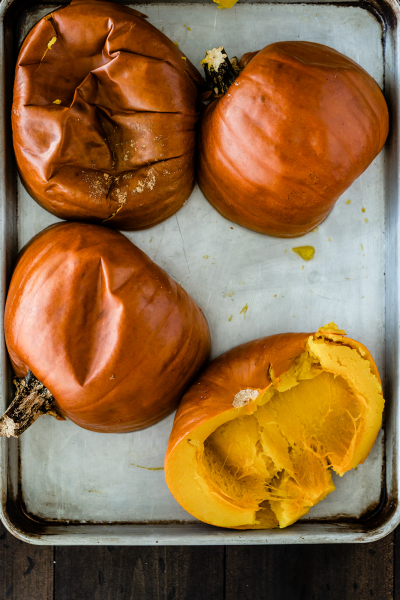 Remove the pan from the oven and let the pumpkin cool for 10-20 minutes. You don’t want it so hot that it destroys your food processor. 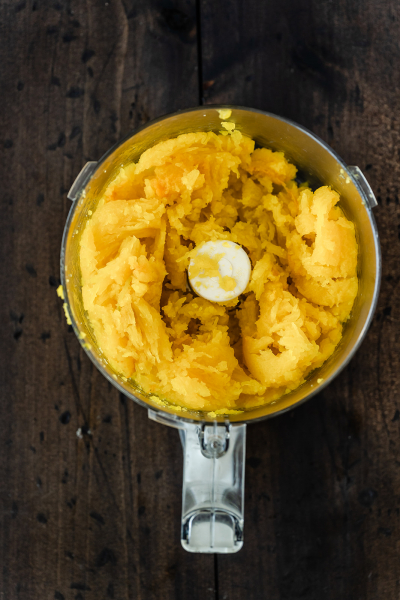 Then scoop the flesh into a food processor, blender or a large bowl (to blend with an immersion blender). Blend until completely smooth. 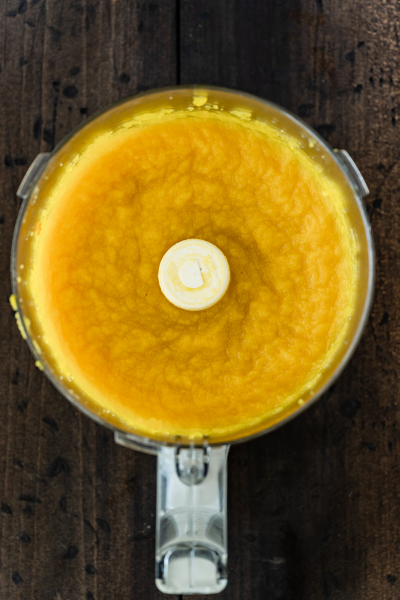 How to thicken pumpkin puree:

Place a large sieve lined with cheesecloth over a large bowl. You can also use a clean tea towel. Pour the pumpkin in and let it drain. 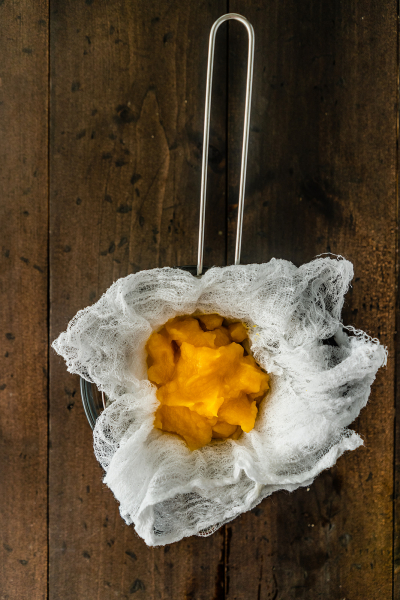 Your puree may not need much time to drain, or if it’s particularly wet like mine was, it may take a while to get to the right consistency. If you’re doing a large batch of pumpkins all at once like I was, it’s best to do it in a few different batches to ensure that it drains properly.

When it looks like it has the right consistency, place the pumpkin in a bowl and stir together as the parts closest to the cheesecloth will have less moisture than the pumpkin at the top.  If your pumpkin puree seems too dry, add a little of the liquid from the bowl. 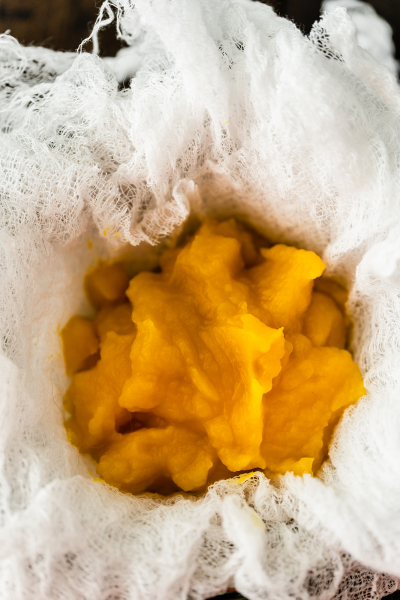 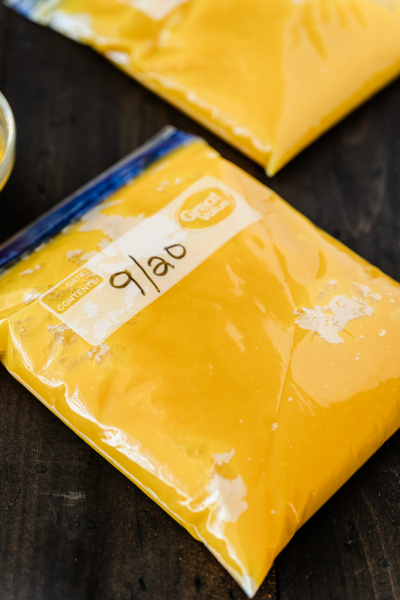 You can freeze them in Ziplocs or really, any kind of container. I like to label them with the date.

How long does pumpkin puree last in the fridge?

It keeps in an airtight container for 4-6 days. 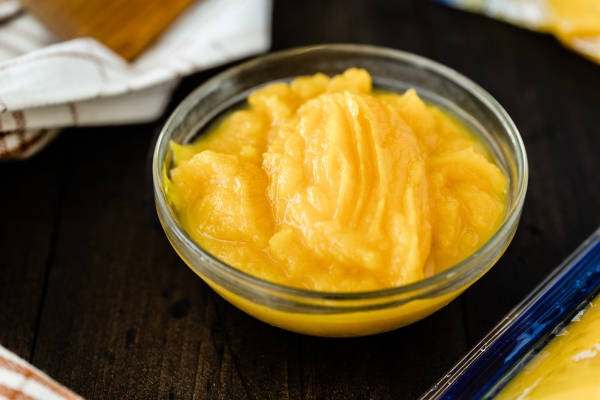 Have you ever made homemade puree before? How’d you like it compared to canned? If you give this recipe a try, I’d love to hear how it goes!

If you need some ideas on what to make with it, try this Whole Wheat Pumpkin Cake, these Healthy Chocolate Chip Pumpkin Muffins or these Whole Wheat Crustless Pumpkin Pie Bars.

How to Make Pumpkin Puree

Author Heidi @ Food Doodles
Course Condiment
Cuisine American
Print Recipe
Pin Recipe
Prep Time 15 mins
Cook Time 1 hr
Total Time 1 hr 15 mins
How to make pumpkin puree, straight from a pumpkin instead of a can! It's simpler than you probably imagine and can be frozen.

This is going to vary wildly from pumpkin to pumpkin but with an initial pumpkin weight of 2 pounds (907 grams), your yield will be about 1.5 pounds (680 grams) of pumpkin puree. 1 cup of pumpkin puree = 240 grams. So that'd be about 2 3/4 cups of pumpkin puree. That's if not using the skin. If you use the skin, you'll have more like 3 1/3 cups. This is per pumpkin!
Tried this recipe?Tag me today! Mention @easywholesome or tag #easywholesome!