This mozzarella bruschetta is incredibly simple but packs a ton of flavor. It can be made in the oven or on the grill. It’s also easy to make dietary-friendly (gluten-free, vegan, paleo, etc).

This recipe, along with my Italian Tomato Salad, is our favorite use of tomatoes. If we went crazy buying tomatoes on sale, this is what we do with them.

It’s quick, easy and so very satisfying. It’s especially great if you’ve got the grill on. Admittedly, we usually use the oven, because it’s turned on way more often than our grill, but bruschetta is even better grilled.

This bruschetta could also be called Caprese bruschetta. Lots of mozzarella, fresh basil and tomatoes.

Authentic bruschetta calls for just olive oil, bread, garlic, tomatoes, basil and salt. It can vary a little from region to region. Sicilian bruschetta, for example, might use oregano instead of basil. 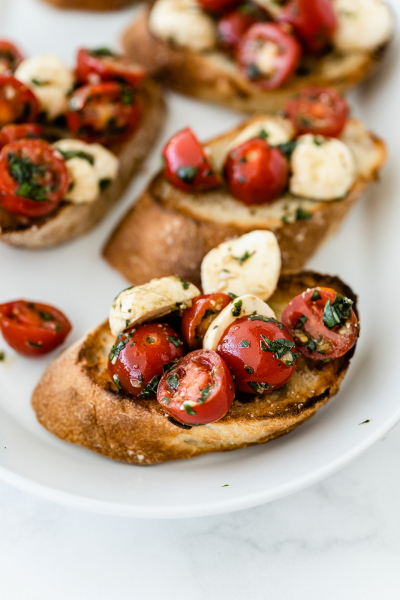 In my recipe, there’s also (obviously) mozzarella as well as balsamic vinegar and black pepper. Like I mentioned in the tomato salad post, Italians rarely use black pepper in their cooking.

But we tried this bruschetta with and without black pepper, and we definitely preferred it with black pepper. Sorry to my Italian friends. I hope you don’t think I’m butchering bruschetta. 🙂

The first few times we made these, we had soggy bruschetta. I’ve got a few tips to help avoid that!

If using cherry tomatoes, as you see in the photos, pat them dry after cutting to prevent soggy bruschetta.

If you use another type of tomato other than cherry or plum tomatoes, you’ll want to deseed the tomatoes. We first made this recipe several times without deseeding them and the result was always a mess.

At first, I thought there was no way I was going to spend time deseeding the tomatoes. I scoffed at my husband when he suggested it. I really thought it was absurd. 😂 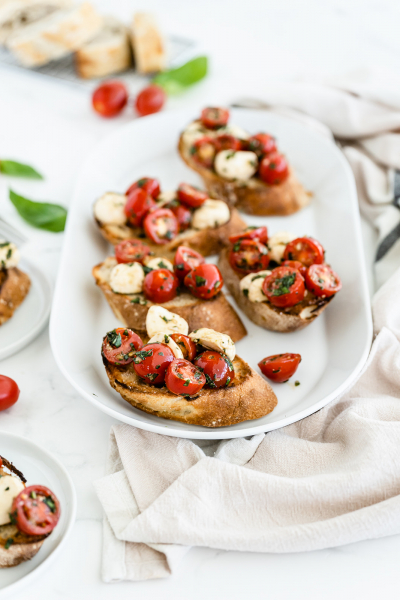 But it really only takes a minute or two. It’s worth it not to have soggy bruschetta!

Before we first deseeded the tomatoes, I thought that maybe omitting the oil from the recipe would help. I mean, it’s extra liquid.

It seemed logical. But nope. Don’t do that.

That one teaspoon of oil really makes a difference! Our reaction was basically, “Oh nooo. This is all kinds of wrong.”

You want to use really good, ripe tomatoes. Beefsteak, heirloom, cherry or plum are all great. 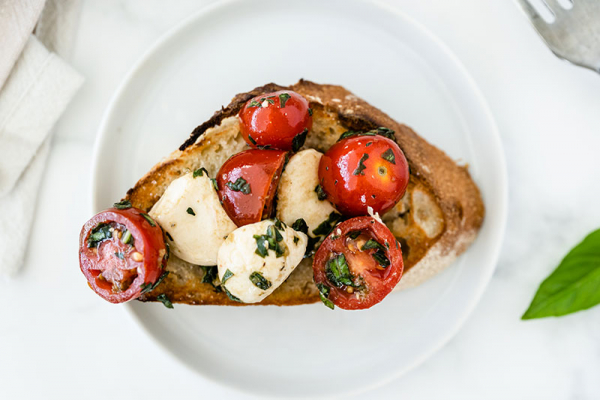 Some recipes also call for blanching the tomatoes. I found this totally unnecessary. It adds time and effort to the recipe but didn’t yield any better results. Plus who wants to heat up their kitchen even more during the summer!

Unless your bread is quite salty, I recommend salting the bread after you brush on the oil. It may sound odd but that little extra bit of salt really makes a huge difference. Sorry to any Italians who think this is crazy.

I think this bruschetta with mozzarella is a bit more garlicky than other recipes. I experimented with using minced cooked garlic, raw minced garlic and rubbing the garlic cloves directly on the toasted bread pieces (which is called fettunta).

The fettunta method is the traditional way to make bruschetta. Maybe my garlic was too old, maybe I used the wrong bread or perhaps my slices were too thin, but it didn’t really work for me.

Surprisingly, we both like the raw minced garlic the best. It’s less work than cooking the garlic so I was happy. 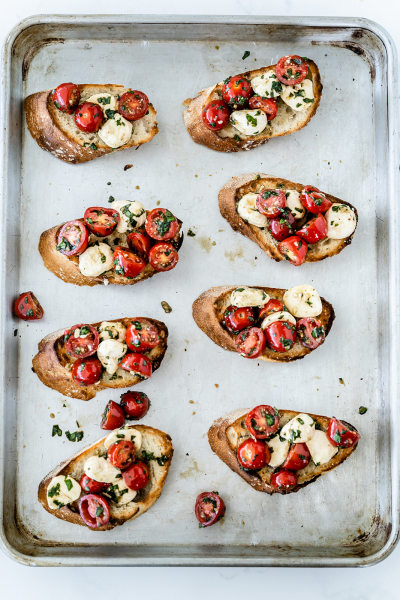 Speaking of bread, you don’t want to use any bread. It should be nice and crusty. A good artisan or rustic loaf should work well.

You, of course, don’t want any big holes in the loaf so that the topping doesn’t fall through.

We loaded this bruschetta with halved mini mozzarella balls but if you don’t have access to those, you can use whatever mozzarella you’d like.

If you want to use those, then I recommend cutting them into pieces, salting them, and letting them drain on paper towels. Let sit for about 10 minutes and then use more paper towels to really pat them dry. 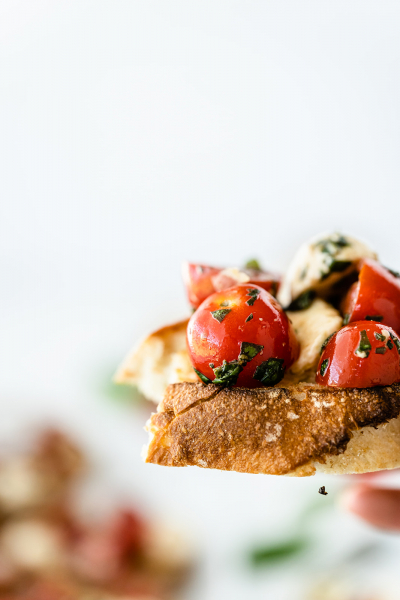 You can also, of course, use a bit of Parmesan or Pecorino Romano instead of mozzarella.

It’s also delicious without any cheese! That’s how we most usually make it since we don’t often have the right cheese around. Then it’s also paleo and vegan (as long as you use the right kind of bread).

Traditional balsamic vinegar, which is incredibly expensive and which you can find at Italian specialty stores and online, doesn’t have gluten.

The regular stuff you find at the grocery store, Balsamic Vinegar of Modena – Aceto Balsamico di Modena IGP/PGI, may or may not contain gluten. Then there’s imitation balsamic vinegar that you’ll really want to avoid. 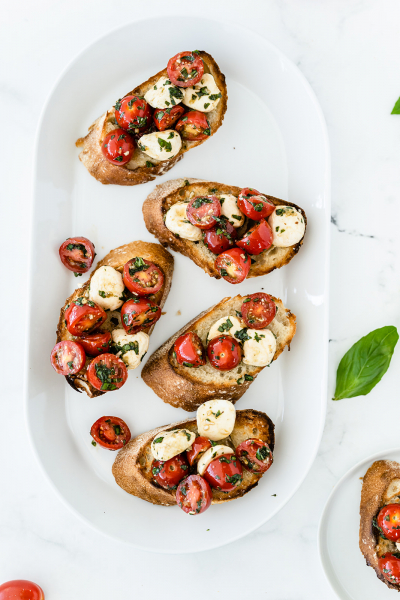 I’ve read articles that say to use nothing but the traditional kind, Aceto Balsamico Tradizionale DOP / PDO. I always use the regular kind and absolutely love this bruschetta.

I didn’t need a tiny 100ml (3.4oz) $65 bottle. I don’t think you do, either. Just make sure your bottle doesn’t have nasty additives, artificial flavoring, etc.

You can also use red or white wine vinegar. I recommend using 1/2 tablespoon, tasting, and adding more if needed.

For gluten-free bread, you can use store-bought or this gluten-free artisan loaf. For paleo, check out this paleo crusty bread. This vegan artisan bread.

If you try out this mozzarella bruschetta, I’d love to hear what you think! 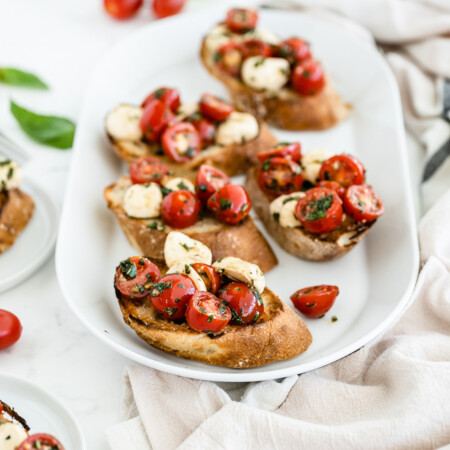