This blueberry milkshake is so quick and easy to make, only calls for 5 ingredients and tastes incredible! It can also be made paleo and vegan by using compliant ice cream and milk.

It’s been so hot here lately. I really do not feel like turning on the oven.

I’ve even put the pressure cooker and an induction burner out on the balcony so I don’t heat up the kitchen even more. We don’t have air conditioning so every little bit helps. 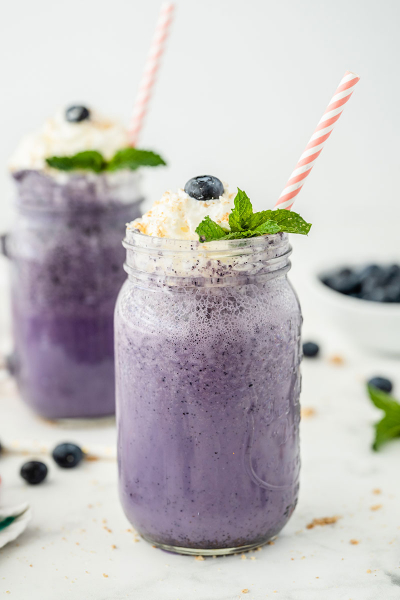 So we’re drinking quite a few smoothies, this chocolate banana protein shake, and milkshakes right now. I’ve made this blueberry milkshake several times over the past few weeks and just love it.

I’ve looked at a lot of blueberry milkshake recipes and find it weird that nobody mentions the difference between frozen and fresh blueberries and how they work in milkshakes.

If you use fresh blueberries, you can’t put the milkshake in the fridge for later. It gets weirdly gelatinous.

You can reblend it but that’s kind of annoying. If you drink it right away, it’s not an issue.

If you use frozen blueberries, straight from the freezer, then the milkshake is kind of gritty at first. But maybe after 10 minutes, they thaw and the texture is great. 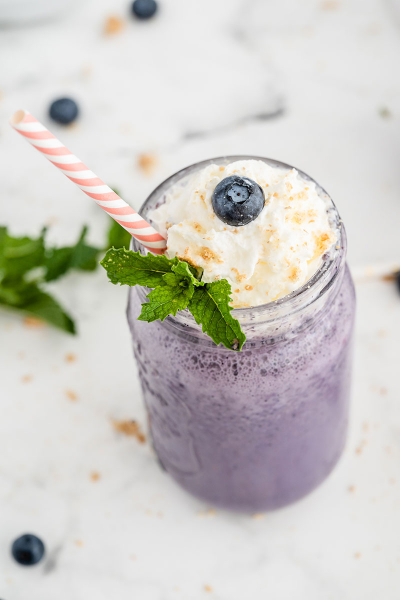 I prefer to defrost them, drain them of any liquid, and then blend them so I can drink the milkshake immediately.

The color is also much more vibrant with frozen blueberries. At least it is with the small wild blueberries.

I haven’t tried this recipe with fresh blueberries that I froze myself so I have no idea if they’d have that gelatinous issue. If someone tries it, please let us know!

For a paleo, vegan and dairy-free version, just use an appropriate milk and ice cream. There are lots of vegan and even some paleo ice cream brands out there but at about $10 per pint, at least where we live, I just can’t do it.

This paleo vegan ice cream is a great choice! It feels kind of silly to make homemade ice cream only to toss it in a blender for this blueberry milkshake. But it’s what I did.

That homemade vanilla ice cream is maple-sweetened, just like this milkshake. Blueberries and maple syrup are truly delicious together.

My favorite ice cream or cheesecake topping is this blueberry sauce, which is nothing but blueberries simmered with maple syrup and vanilla.

Don’t have ice cream on hand but have too many blueberries to handle? Try my Pineapple Fruit Salad! It’s not your average fruit salad and so refreshing.

If you try out this milkshake, I’d love to hear what you think! 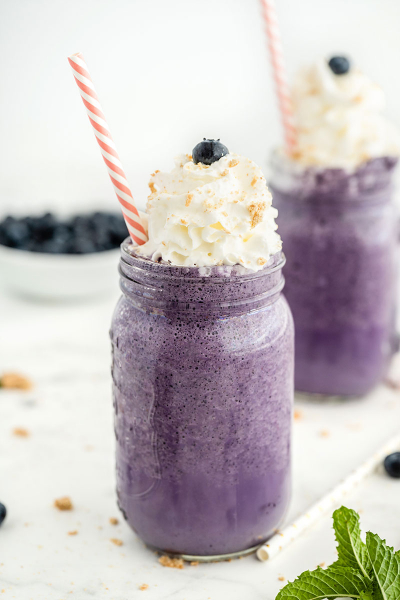 Questions about this milkshake?

Do I have to use milk?

You have to use at least some to get it drinkable. As little as 1/2 cup might be enough. But you can use whatever type of milk you’d like!

Full-fat or low-fat dairy milk, soy milk, almond milk, oat milk… whatever you’d like. If you use canned coconut milk, there will definitely be some coconut taste to the milkshake.

For paleo vegan, I used almond milk. I used unsweetened but if you use sweetened, it shouldn’t make the milkshake too sweet.

Can I use other types of fruit?

I think any other fruit would work but you might need to add more or less sweetener.

Can I use frozen yogurt?

I think that would work just fine.

Can I use plain yogurt / vanilla yogurt / Greek yogurt?

Yes, then you’ll have a smoothie. If you use unsweetened plain yogurt or Greek yogurt, you’ll need to add quite a bit more sweetener.

Can I use something other than maple syrup or honey?

Any kind of sweetener should work. Granulated or liquid. 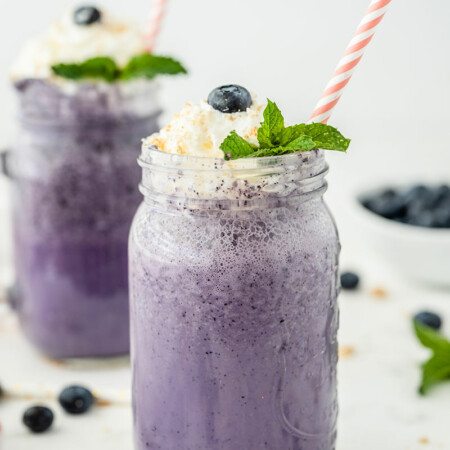