This smoked corned beef uses minimal ingredients and is relatively easy. Smoking it adds a ton of flavor that you don’t get by cooking it the traditional way. Because it just uses meat and spices, it’s naturally gluten-free.

In 10 years of blogging, I’ve never posted a grilled or smoked recipe. Up today, we have the first of hopefully several smoked recipes.

Nothing says St. Patrick’s Day like corned beef, right?! At least in the US. 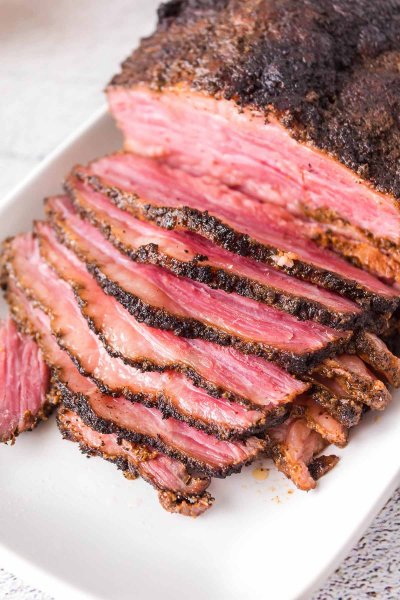 What is Corned Beef?

Where does the term “corned” come from?

It is a term used when the meat is salted with large kernels or “corns’ of salt. So corned beef is basically a salt-cured and seasoned beef brisket. 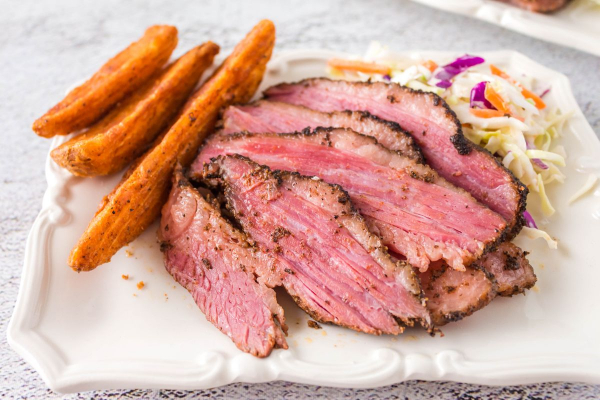 How to Pick the Best Corned Beef

Corned beef is usually made from brisket cuts. And if you buy from a butcher, you can choose from three different types of cuts.

The flat has a consistent thickness and is the learner of the three. The point is the thicker end of the brisket and has marbling which makes it flavorful. Or the whole brisket which includes both the other cuts. 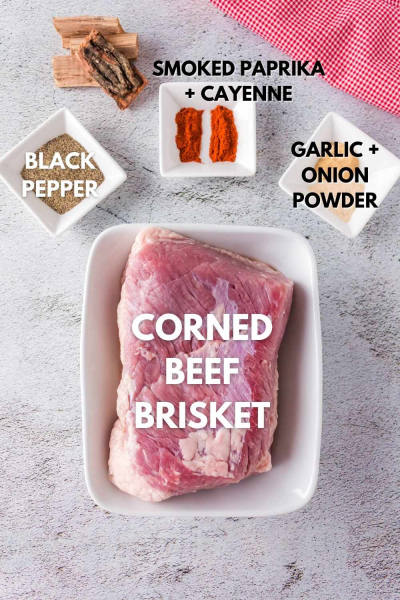 Corned beef usually has a generous layer of fat which helps flavor the meat as well as tenderize it.

If you want to reduce calories, you can trim a little of the fat, but I wouldn’t recommend trimming it all off because the meat will be tough and less flavorful.

Why You Need To Soak It

If you buy corned beef (as opposed to making it from scratch by yourself) then it will be very salty.

It is essential to soak it to reduce the salt for the best results. Otherwise, it’ll just be way too salty. 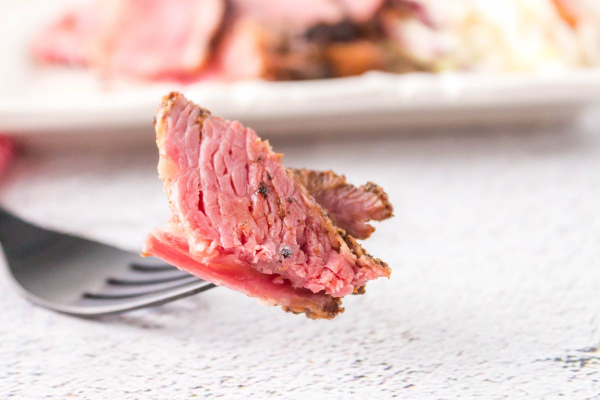 How to Prepare Corned Beef

While the smoker is preheating, mix together the rub ingredients. You need black pepper, garlic powder, onion powder, smoked paprika, and cayenne pepper. 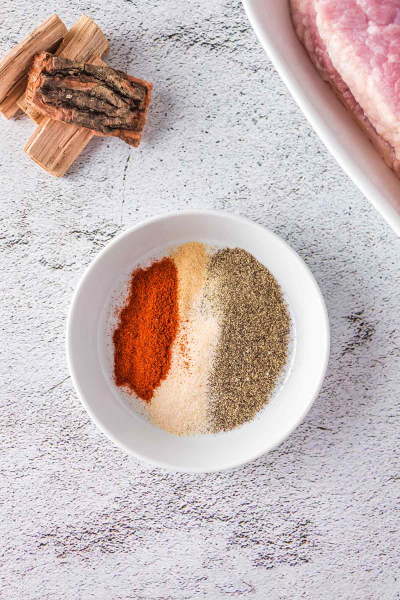 Rub the seasoning mix thoroughly on both sides of the brisket. 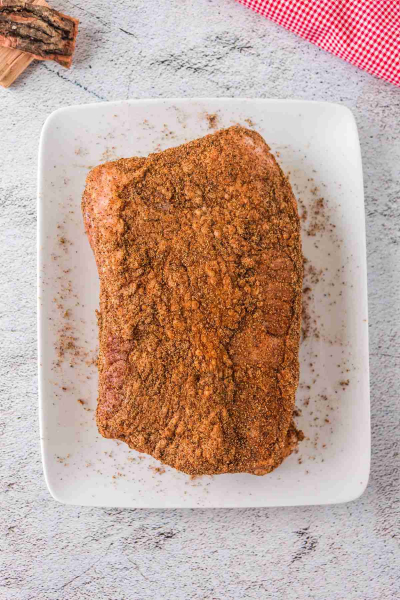 Once the smoker is at the right temperature, place the meat on the smoker.

Brisket contains strong muscle fibers making it tough which is why it is usually slow-cooked at a low temperature to help get that amazing taste and tender texture. 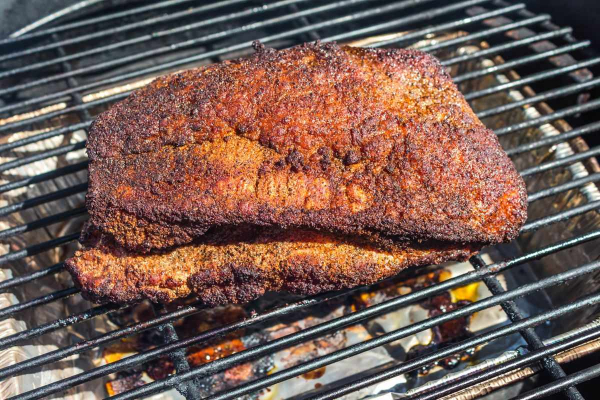 You will then wrap the meat in foil and smoke again until you reach an internal temperature of 195 °F (91 °C) which usually takes another 2 to 3 hours. 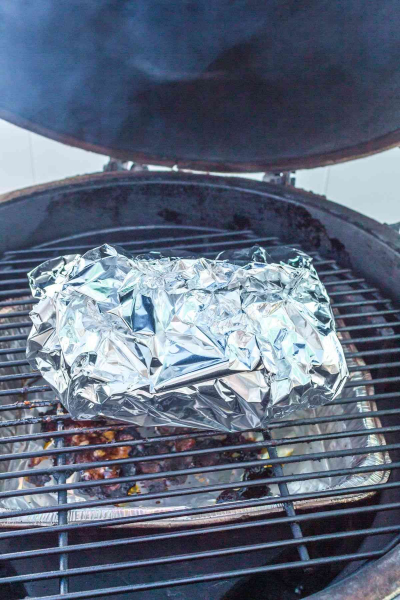 Remove the foil and let it rest 30 minutes or up to 2 hours before you slice and serve. It’s best to slice the meat right before serving.

But hold on! Knowing how to slice the meat is as important as the entire smoking experience. 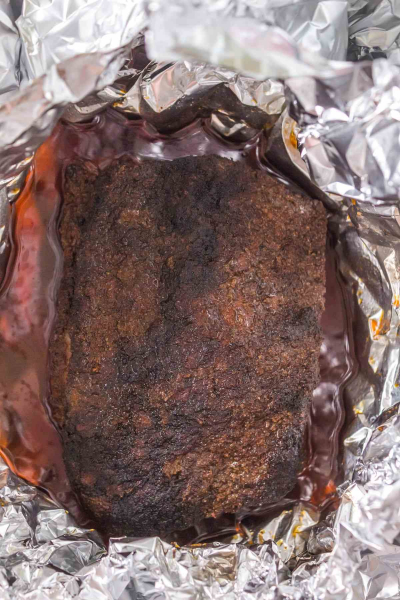 How to slice corned beef brisket

First, the knife actually matters so make sure it’s a serrated knife, not one with super small ridge-like teeth. You want a smooth serrated edge to slice right through the meat without tearing it to shreds.

Like I stated before, the full brisket is made up of two overlapping muscles, the point and the flat. Because the grain runs in two different directions, it makes slicing the meat a little tricky.

So now you’re ready to slice. First cut the brisket in half, then slice across the flat against the grain.

Then turn the point of the brisket 90 degrees and cut in half. Slice along the point to make sure you’re slicing against the grain. This ensures a tender and mouth-watering corned beef. 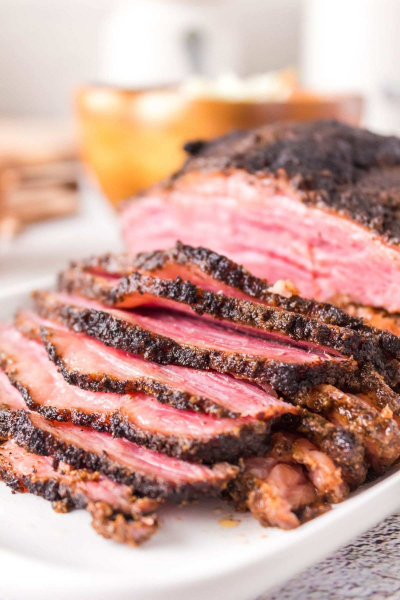 In the photos, it doesn’t look like it was cut against the grain. The grain on that small cut changes as you cut into it. It was a bit of an unusual piece of meat.

How to Served Smoked Corned Beef

Corned beef is traditionally served with cabbage and potatoes, but I went with something more BBQ-ish. Potato wedges and coleslaw!

If you want to go the traditional route, try these Instant Pot Potatoes Colcannon! Then you’ve got your potatoes and your cabbage. 😉 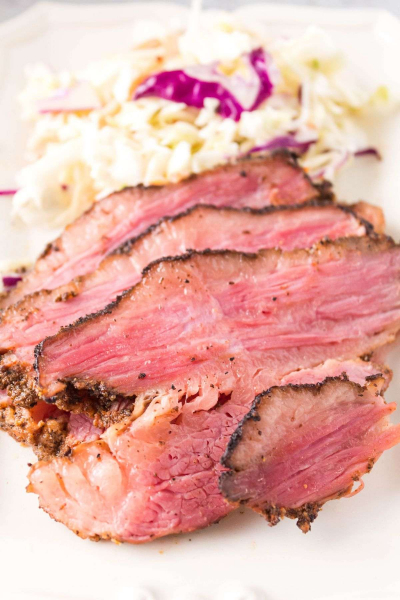 Most Americans darn their greenest outfits and drink copious amounts of green beer and eat corned beef on St. Patrick’s Day, and while some people say it is an Irish-American tradition, corned beef actually has Irish roots.

Traditionally, the cow was considered a symbol of wealth in the Gaelic religion so beef was reserved for royalty. Pork on the other hand was the most eaten meat in Ireland and on St. Patrick’s Day, you will mostly find boiled bacon.

However, in the 16th century with England conquering Ireland, the English put beef on the table as they say, to the victor goes the beef.

Then in the 1660s, the “Cattle Acts” prohibited cattle export to England which kept Irish beef at home which increased the abundance and made it more affordable. 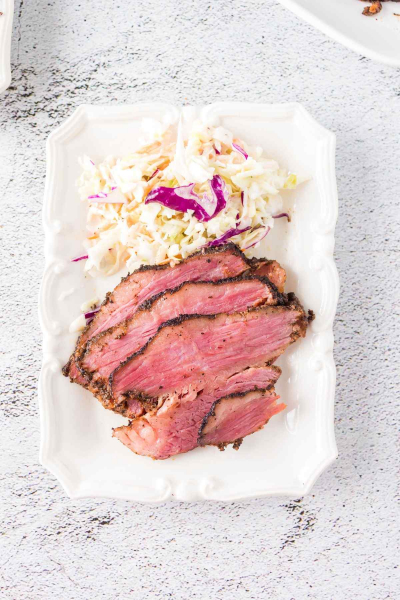 While salting beef to preserve it has been around for thousands of years, the term “corned beef” dates back to the time of the Cattle Acts.

Ireland became the center of corned beef production, again due to the abundance of cows and lower salt tax. The quality of salt is as important in curing meats as the cut of the meat.

Irish companies could get high-quality white salt at a much lower cost which gave them a reputation of producing excellent cured meat.

The city of Cork became the center of the corned beef trade for over a century and shipped out half the beef that Ireland produced. It was so popular that corned beef dominated the transatlantic trade.

But as luck would have it, as the prices hiked due to demand, the very people that made the product could no longer afford to eat it. So they settled for pork and the new crop of the Irish potato.

Then the Great Irish Potato Famine of 1840 sent many Irish to America. Here corned beef was affordable.

And so the Irish-American tradition of eating corned beef on St. Patrick’s day begins, but remember if you go to Ireland expecting this delicious meal, you might be surprised and only find the traditional Irish bacon.

So that’s it! Enjoy. 🙂 If you make this or any of my recipes, I’d love to see pictures of your creations on Instagram, Facebook and Twitter! Hashtag them #fooddoodlesrecipes so I can check them out. 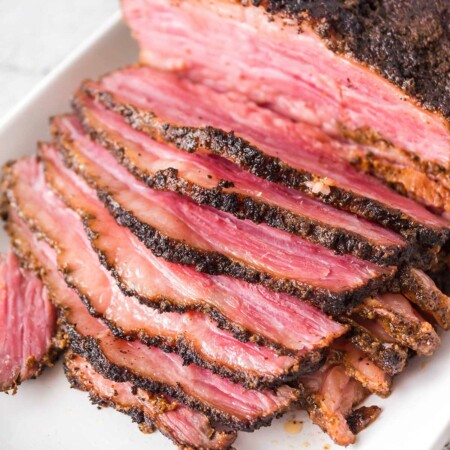